On February 02, 2018  visual artist, graduate student of the University of Hasselt Natalia Drobot made a presentation at the seminar "West and East: Universalism of Culture"

Natalia Drobot presented her view on the phenomenon of "Ostalgia", which is common among emigrants from the post-Soviet countries. She told about the history of creation of her works, as well as the work of her colleagues.
Nataia Drobot noted that originally the term "Ostalgia" related only to the feelings of Ossis (German "Ossis") - former GDR citizens. Today, however, this phenomenon is increasingly used in connection with former citizens of the Soviet Union, especially immigrants from the countries of the former USSR. Ostalgia was studied by philosophers, sociologists and psychologists, but in the art Ostalgia is mainly exhibited through the use of Soviet symbols, consumer products, objects, photographs, military uniforms, that is, through everything that people keep from old good times.
In the Natalia Drobot's interpretation Ostalgia is any emotional connection with the Soviet past, which is reflected in a kind of selection of memories from autobiographical memory.

The meeting was moderated by Professor A.A. Kara-Murza, the chief research fellow of the Internationsl Laboratory for the Study of Russian and European Intellectual Dialogue.

February 05, 2018
Topics
Research&Expertise
Keywords
international faculty
About
Faculty of Humanities, International Laboratory for the Study of Russian and European Intellectual Dialogue
About persons 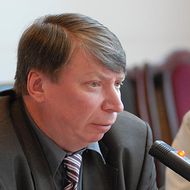