Shedding Light on Mysteries of the Past

Michele Minardi, from Italy, holds a PhD in Archaeology from Sydney University and has spent a number of years in investigating Karakalpakstan in Uzbekistan. He has recently joined the team of Centre of Classical and Oriental Archaeology of the Institute for Oriental and Classical Studies as a Research Fellow. We spoke with Michele about his projects, teaching methods and expedition plans.

I am an archaeologist, specialist of Central Asia in the pre-Islamic period. Trust me when I say that still an enormous amount of work has to be done to fill our lacunae regarding the history of the ancient societies and cultures that appeared, developed and transformed to fade in this area of the world. Archaeology is the only discipline capable of providing new data to fill these historical “blank spaces”.

My most recent focus is, for example, on early (or pre-Sassanian) Zoroastrianism. Zoroastrianism, once one of the main religion of Central Asia, disappeared progressively from this area of the world with the advance of Islam and much of its ancient history is still shroud in mystery. My current fieldwork focuses on the study of the traces left by this religion on the funerary realm of Ancient Chorasmia.

Karakalpakstan Is Full of Treasures and Surprises

The expeditions are still ongoing. Since 2010 I am member of the Karakalpak-Australian Expedition to Ancient Chorasmia (KAE), a joint project of the University of Sydney and the Uzbek Academy of Sciences, Karakalpak branch. I am Field Director and Survey Manager of this team which is currently led by professors G. Khozhaniyazov and A. Betts. We are operating at the site of Akchakhan-kala, in today’s Karakalpakstan (northern Uzbekistan), once a royal seat of the Chorasmian kings which saw its apogee about 2000 years ago.

The next fieldwork campaign scheduled for September 2020. The site of Akchakhan-kala is of extraordinary importance for the evidence discovered during its most recent excavations: the wall paintings found at the site, one the largest and most ancient corpora of wall paintings of pre-Islamic Central Asia, which lavishly decorated the walls of its main building (known as the “Ceremonial Complex”), depict, among other themes, the earliest known images of colossal anthropomorphic Avestan deities.

Additionally, I am also leading a survey and excavation KAE side project on the Sultan-uiz-dag mountains of Karakalpakstan, investigating ossuary necropolises, sacred fires and dakhmas (also known as “Towers of Silence”). This work is supported by a grant of the Australian Research Council of which I am Co-PI together with A. Betts, Professor F. Grenet (Paris) and Dr M. Karlybaev (Nukus). We have already published, individually and collectively, several scientific papers on our discoveries.

I did not yet have the chance to visit the site of Old Kandahar. I am planning to do that, in agreement and collaboration with the Afghan authorities in charge of their national heritage if the political situation will allow it.

My “Old Kandahar Project”, supported by a grant of the Shelby White and Leon Levy Program for Archaeological Publications (Harvard Semitic Museum), focuses on the study of the unpublished material of the British excavations at the site occurred between 1976 and 1979 under the direction of the late Dr Svend Helms. This project will be enriched by the contribution of Alison Betts, Dr Elisa Iori and Dr Luca Maria Olivieri (of the Italian Archaeological Mission in Swat, Pakistan), all field archaeologists active in the territory of the “Indo-Iranian” borderlands. I have been already in Sydney, Australia, to collect the whole bulky archive of the Kandahar British Expedition, and now I am going to organize a visit to the Kabul National Museum to assess the material from the site there hold.

Old Kandahar is a spectacular site, at the centre of which rises a mud-brick and clay citadel probably founded by the Achaemenids in the territory that once was called Arachosia. After its conquest by Alexander the Great, the city was ruled and controlled by several different kingdoms and empires, including the Seleucid and the Mauryan ones and the Indo-Greeks. The history of Kandahar is the history of the ebb and flow of these empires across Central Asia and India so that the reassessment of its history, thanks to unpublished archeological data, will also contribute to cast a new light on their history.

I am lecturing on a quite vast subject: Archaeology of Pre-Islamic Iran and Central Asia. This is per se challenging, but I always keep in mind a sentence by Flaubert (and in doing so, I am in debt to two very important Italian scholars who used it already as epigraphs way before me) “Ce ne sont pas les perles qui font le collier. C'est le fil.” [it’s not the beads but the thread that makes the necklace]. In other words, one should consider examples, key facts and select cases to illustrate the complex continuity of the historical development of the Iranian world. Only in this way would be possible to provide to students a framework on the multifaceted issues present when dealing with archaeology, and to give them tools to deepen the various arguments touched during classes.

I would like to plan new excavations and involve students in such field activities … all depends from the research funding provided by HSE!

‘I Am Almost a Nomad’

I have a good feeling about Moscow and leaving abroad it is something I generally enjoy. I would say that I am used to it – I am almost a nomad –  if you consider the fact that from the small Italian village where I was born I first moved for my studies in Florence and Rome and then, in 2009, I left the country to undertake a PhD in Australia where I stayed four years before moving again, first to Bordeaux and then to Paris. Now Moscow, a new experience.

In January I am going to start a Russian language course at HSE. I already have a basic command of your beautiful (and complicated!) language due to my work in Uzbekistan and my research concerning the archaeology of Central Asia. For the rest, while here in Moscow at work, I will enjoy its museums, concert halls, theatres and gigantic boulevards… I also love snow in winter, but it seems that this year I am not going to see much of that! 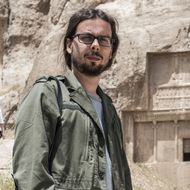 Research Fellow at the Centre of Classical and Oriental Archaeology